Utahn to Ski Season: "ARE WE THERE YET!" 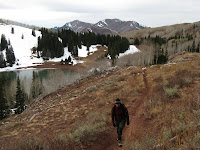 Say what you will about dates on the calendar, but I've decided that human nature dictates more when the seasons change around here than any sort of scientific indicator. Once again, the race to open first has resulted in Solitude and Brighton offering icy turns on their narrow strip of man made snow. This "G-string of white on the bare ass of the Wasatch" serves an important purpose here in Utah however, it feeds a winter recreator's DESIRE for winter after a long, dusty summer.

I myself fall into this trap. Just last Wednesday, Lexi and I were hiking up to Desolation Lake and I found myself going into nervous twitches as I saw the thin cover on all the north facing slopes. Like many skiers, I resorted to voodoo paganism in an attempt to bring the storms that would build another great base for a season of skiing. At the crest of the Wasatch, between Big Cottonwood and The Canyons Ski Resort in Park City, I poured out an offering of booze I had to Ullr, the Norse god of snow. Unfortunately, thanks to Utah's state run liquor stores being closed on the Veteran's Day holiday, all I had to offer was a bit of bargain priced coffee liquor that I bought from a discount bin in Wendover 5 years ago. I did make a point to mention to Ullr that it was in fact the state of Utah who was to blame for the paltry offering and had I lived in a more progressively alcohol dependent state like Colorado, I could have easily pulled up to the Liquor Barn before embarking on my hike and purchased a bottle of spirits like this one which contains so much inebriating goodness that one must use two hands to pour. 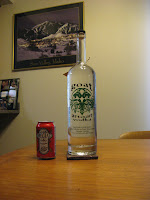 I really think SkiUtah needs to sponsor a study to quantify the snow total's relationship to the access of Jagermeister and the inevitable ceremonial donations to Ullr that accompany the consumption of said liquor. Perhaps then we could convince the DABC to open on holidays and Sundays?

Cheap booze aside, we did get the first real snowstorm of this season yesterday, although totals in the mountains are nothing impressive. With the prospect of another high pressure front moving in tonight/tomorrow, it appears we may still be waiting a little longer for the start of the ski season. I don't know why we skiers are in a hurry for the season to start? It does seem every year, like farmers sweating out a dryspell, we moan and complain about the absence of snow in November. I blame the ski resorts, Solitude and Brighton would be better served, snow wise, if they held off until December and instead, stretched the season a few weeks later into April. I suppose they do it though because just as our passion to ski proceeds conditions by at least a month, our spring fever to hike, camp and cycle usually takes over even when Ullr is still offering up great days on the mountain.

When Lexi witnessed my ritualistic pouring on the crest last week, she remarked how in any other circumstance, the dialogue with a celestial being might qualify me for psychological help but considering her familiarity with the accepted, organizational insanity of skiers, she would lay off spiking my oatmeal with Thorazine. I do somewhat agree, speaking to the sky and staining granite and quartzite with perfectly good alcohol seems excessive, but in this city, one only needs to look towards downtown and the golden statue on towers of grey granite to be reminded that we all take a few more things on faith than rational thought deems logical. So with that, I'll pull the framed picture of Ullr out of the closet and set an Alta shotglass of Jagr in front of it, hoping for the best.