Dear Forum, I've often read the letters here and could never believe they were true... until it happened to me. 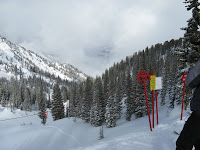 OK, what I experienced today at Solitude doesn't quite meet the fantasy quotient of the lurid tales published in the back of gentleman's magazines and written by lonely men with limited metaphorical resources to describe female anatomy. However, when I skied off the Summit chair after 2 hours of tracing and and scrounging the overnight powder that had settled into yesterdays grooves, I did feel incredulous at what I witnessed, like the shy guy in Des Moines who writes about seeing that cute waitress at the all night truck stop beckoning him back into the stock room... allegedly. The sight that got me going as my pre-work ski drew to a close was ski patrol flipping up the "stop" sign at the top of Honeycomb Canyon... or to continue with the bad Penthouse letter theme: The red octagon of forbidden territory was raised, revealing the double black diamonds which welcomed "experts only". Meanwhile a small opening in the ropes enticed me to play in the pure, creamy white, untouched snow that undulated below me.

Unlike Alta, where skiers line up 20 to 35 long for sometimes an hour, waiting for patrol to open a gate, the collection of skiers that found themselves at the top of Honeycomb Canyon Wednesday morning were all looking at each other like members of the "short" line at the DMV, thinkin, "Should we be here?" A ski instructor giving a lesson to a couple got to lead them through first, giving them a story they will probably be boring all their friends with in a week back in Nashville, or Pasadena or Newton, Mass. or whatever flat wasteland they come from. Then I went through, getting 4th tracks so to speak, on snow that probably hadn't been skied since Monday. Within 3 turns down the slope, I was tripped up and fell head first into the powder. I couldn't remember the last time I skied snow this deep and my legs certainly didn't remember either. Above me, 10 or so other skiers, all similarly amazed with the dumb luck of being at the right place at the right time, cheered my divot. It never felt so good to crash in front of an audience and I raised a pole in exaltation.

Further down slope, a dozen of us all bottle necked as the powder and the low angle of Honeycomb had us struggling like we were trying to pull a trailer behind us. We all took turns wallowing then leading, trying our best to follow tracks made by others who were plowing in front. Then, as those of us behind gained speed thanks to the trailblazers, we cruised past them only to be dragged down into the quicksand ourselves, for a few short moments, getting first tracks. I reached a spot where I recognized a traverse that cut through some trees and I broke away weaving down the bobsled track with more recklessness than normal thanks to the blanket of fresh around me.

As I broke out of the trees and back onto the packed out Honeycomb Return trail, I thought of how yesterday at this time, I was busy at home with various tasks and wondering if I was missing out on a great powder day. Sometimes during ski season, even though I love it, I become a slave to it. Very quickly, a routine of preparing all my ski gear and meals at 11:30 at night so I can get up at 6:30 am, drive up the canyon, ski until 1 and then go straight into work gets to be toilsome. So Tuesday, when I thought I was being opprobrious to Ullr for not partaking in the long awaited bounty of snow that I've been beseeching him for weeks for, I reminded myself that tomorrow is another day, with another chance of snow. And in this case, a chance for a knee yanking run down Honeycomb.
Labels: honeycomb powder solitude