As a Buddhist, I try not to get too caught up in seeking rewards from a higher power.  However, a little Shintoism can't help but leak into my eastern view of nature.  When communing with nature, there are two spirits that I feel the most in tune with:  Ullr, the Norse god of winter and Kokapelli, a Fremont Indian icon known for for trying to halt the spread of winter.  Call it superstition, hedging my bets, or just a way to conceptualize ones appreciation of good fortune regardless of season, but I like to keep each of these characters in mind while I ski, bike or wander the unique landscape of Utah.  This weekend I had the rare opportunity to experience the extremes of Utah's Wasatch Mountains and Colorado Plateau in a 48 hour period that would have made both Ullr and Kokapelli happy.

It started in the the White Pine parking lot around 7am.  There were a few other cars, including a group of snowboarders preparing for a day at Snowbird.   They had driven down from Idaho the night before and slept in their truck.  Their blaring stereo and morning cocktail hour changed the normally serene winter trailhead into a pre-game tailgate party, a reminder to me that ski season was indeed nearing an end.

As the name explains, the "Super Tour" is not your typical morning excursion of backcountry skiing.  The route is long and traverses terrain that is consistently prone to avalanches.  Lincoln had tried twice to complete it; Jeff once.  When prospective tours were discussed earlier in the week, the "Super Tour" and Tunder Bowl captured more than mild curiosity in all of us.  A spring day like this seemed best for the attempt since the days were long and the snow was safe.  However, it wasn't just timing that made the Super Tour appealing.  For any Utah skier who peers up at the huge bowl to the left of Lone Peak, the reward is quite obvious.  It must be the best looking line you can see with the naked eye from Salt Lake and we wanted to ski it. 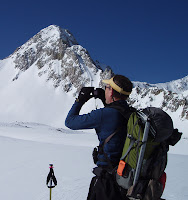 After a little over 2 hours, we had come 2,000' in elevation and emerged from the trees of Red Pine Fork near it's neighboring canyon, Maybird Gulch.  Towering ahead of us was the Pfeifferhorn, the perfectly shaped pyramid that rises over 11,000' on the southern ridge of Little Cottonwood Canyon.  While the Pfeifferhorn itself would have been a memorable goal for the day, we had our sights set beyond.

We entered the shallow top of Maybird Gulch and traveled west to the opposite side of the draw where we would climb and descend into Hogum Fork.  The divide is fringed with a sharp ridge that made entering Hogum seem like escaping prison-- complete with splinters of granite that crowned the top like razor wire.  Feeling adventurous, we bypassed the obvious saddle between the two canyons tracked north along the divide looking for a spot where Jeff thought we could get a better slope to ski down.  Each of us explored a different gap in the boulders and on the third try, we found a spot where 15 to 20 feet below us, through a manageable crease in the rock, was a wide apron that spilled into Hogum.  Using a rope to aid the descent (since 180 centimeters of ski strapped to your pack can throw off your equilibrium) we all survived the downclimb to a point where we could ski down to the base of South Thunder Mountain.

After Steven lost a ski while trying to click into his bindings on the steep slope, I worried about my own success at getting my skis on.  Since the snow was a thin layer of corn on crust, I didn't feel like I would miss much if I chose to glissade 200' or so down the slope on my backside.   It also seemed like a rare chance to practice a little used mountaineering skill.  The resulting trip gave the rest of the party quite an entertaining show as they watched my barely in control slide for life from below.  The sensation was like tipping back too far on a chair and just barely catching yourself before you tumble over.  After looking back at my ugly asswide skid mark marring the beautiful tracks Jeff and Lincoln put down, my assessment was that while not the best way down, it was a way down. 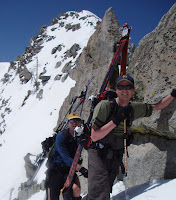 It was nearing 11:30 as we skied over the wide rippled bottom of Hogum Fork and prepared to ascend to the top of the bowl which lie on the other side of a ridge between North and South Thunder Mountain.  I switched to a t-shirt and re-applied sunscreen.  The mid-day heat was also taking it's toll on the snow, so we didn't wait long before starting up.  We were able to skin to a point within 200' of the ridge where Steven and I debated our remaining elevation.  He said 100'-- I was convinced it was no less than 300'.  Minor debate led to a wager sanctioned by Jeff (although no stakes were discussed) and we once again lashed skis to packs and booted the remaining distance up to the ridge.  I passed along a 20' rock spire that separated us from a gap where we could cross into the bowl.  My first impression as I surveyed the horshoe shaped bowl below us was awe, then strangely, an adjustment of my prior perception.  From below, the north facing scoop of white, draped between the peaks like a drooping curtain seemed so immense when compared to the tiny peaks and cliffs that fringe it.  Now, from up close, it looked smaller.  The endless bottom was too hard to fathom as the unblemished white dropped off into some lower elevation trees and began bending into the narrow dark walls of Bells Canyons.

I stashed my pack and skis below the rocks that gated the entrance into the bowl and we settled down near a flat rock wedged into the slope for lunch.  We were here, all of us for the first time, and there was a great sense of "list checking" not only in my mind, but probably everyone else's mind also.  I uneasily stood in our tight quarters then eventually sat down in the sun to eat and distribute some small portions of margaritas that I had prepared in a vacuum bottle that morning.  It turned out Steven won the bet on our elevation, however I thought we were heading towards a different point on the ridge, so I felt less disappointed in my misjudgement. 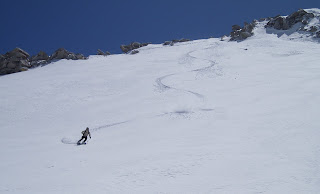 An hour after reaching the ridge, we prepared to finally ski.  If the snow was our only clue, you would have forgotten what the date was.  Light, preserved powder that showed no sign of sun spoilage.  Steven ascended to a point higher on the ridge while Lincoln traversed to a more protected starting point to the right.  I saw nothing wrong with the snow below me and lit out down the slope, whooping for joy after 3 turns.  Surrounded by white and rock I felt euphoria after ascending the limits of the Wasatch and returning to reality with a few stolen moments of ecstasy.  The city below reminded me that this spot, as remote and distant as you can get, was really like toy on a shelf that's beyond the reach of a child.  The kid stares at it regularly until he finally find the means of grabbing it, and when he does, the sense of accomplishment enhances greatly the fun he has playing with it.  I wondered if anyone, especially a fellow skier, was able to see me from the spot near State Street and 4th South where I often stared up at this amazing feature?  Probably not.

As the bowl's slope relaxed, I stopped and watched three more tracks get added to the fresh snow that had fallen a few days earlier.  The monolithic and gapped rock I was standing under only moments ago evolved into a blend of grey mass that lacked definition.  Standing out now was the growing speck of my three fellow skiers who dusted up the powder before we tracked through the rollercoaster bottom of the bowl's west side.

At a rollover, we began hitting tree line and eventually joined with the upper reaches of Bell's Canyon that slid in from the lake that nestled below Lone Peak.  Snow started getting harder to turn in, trees thickened, small wet slides broke off on rollovers and edges hit more and more rocks, but we still skied almost 4,000' of vertical before I A-framed the skis one last time and started the rocky hike down Bells Canyon.  Two hours later, we were at the Bells Canyon Trailhead, sore but happy after a fulfilling day.

That was at 5:30 on a beautiful Saturday in the Salt Lake Valley, enough to reward myself with a night of drinking beer and watching TV.  Instead, by 7:30, I was in my Xterra with Lexi and my bike travelling towards Moab while working the knots out of my quads with a massage ball.

to be continued
[For More Pictures from the Wasatch Super Tour, check out the slide show at the top of the page]