Of Skis and Men

On a Monday morning a few weeks ago, winter reached down from the lofty crevices of the Wasatch and dusted the the lower slopes near Salt Lake with snow for the first time of the 2010/11 winter.  It was fitting that that day I ordered my new skis, Line Prophet 100s, the first pair of new skis for me since 2006.  Since then, winter went back to it's refuge in the high peaks and fortunately, the warm weather has been distracting me from the fact that I have new skis on the way.

Line tries to give you an idea of the style of a ski by breaking down it's performance by percentages on the label.  For instance the Prophet 100 is rated 40% powder, 60% all mountain and 0% park.  At first, this seemed like a nice tool for assessing and comparing, but now that I think about this analytically, it could be construed as: I'll be 40% happy on powder days, 60% happy on other days and never happy jibbing on the rails.  ("Is that what the kids are calling it these days, 'jibbing'," as I pull a corn cob pipe out of my overalls and shake my fist at those young-whipper snappers.)  Of course that's an over simplification, but it illustrates just how far ski design has come.  In my youth, we would have never dreamed of dissecting a ski like that, and if manufacturers did do it, we would have been searching for a ski rated "100% ice".

Ski purchases can be like choosing a religion: a little faith, a little discernment and a whole lotta post-choice rationalization.  After all, no matter who ridiculous your choice in faith is, it's kind of hard not to be a cheerleader for it after you've been initiated, bought large framed glasses and erected a life size statue of Charles Nelson Reilly in your backyard.  So it's human nature that when someone drops $500 or more on skis, they'll make a point of saying, "Why yes, these planks ski like I have magical angels strapped to my feet," while in their mind they are saying, "and when the season is over, I'm taking these planks, angels and all, back to REI."   After all, when the rubber meets the road, or in this case, the PTEX hits the pow, there is no way to know what you're skiing.

Now you may be saying, "Mason, why don't you demo skis?"  And to you I say, "What an intelligent and well thought of idea.  Makes for a crappy blog though."  With my last ski purchase, I did demo my Black Diamond Verdicts.  The result was a double edged sword.  On one hand, I felt confident that those were the best of the skis I tried.  On the other hand, like a 12 year old watching Silk Stockings for the first time, I became consumed by thoughts of desire; desire that surpassed my wallet.  Plus, demos happen during the season and require patience.  I needed something soon because I wanted to take advantage of early season deals I get through my job.  Wait until Christmas and I may be stuck skiing my ski swap K2s for another season. 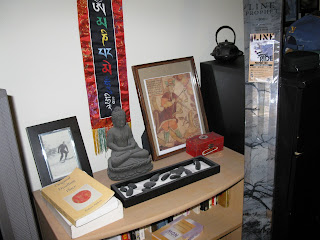 I picked my new skis up Thursday night, brought them home-- still in the cardboard--, put some music on, poured myself a cocktail and opened up the box.  This wasn't a "Christmas Morning Tear Apart", this was a "Indiana Jones, Nazi's Opening Up the Arc of the Covenant, 'It's Beautiful!' Ceremony".  Then I introduced the skis to thier fellow quiver mate, my Black Diamond Verdicts.  I could tell the Verdicts were happy to see a ski equipped for the powder, now they wouldn't have to carry the workload of both backcountry and powder skiing.  Then, I brought them to the Ullr shrine and told them soon this Norse deity of winter would bless them with light, fluffy, dry Utah powder.  (Hmmm, might want to think about that religious fanaticism thing?)

Alta's opening date is less than two weeks away.  However, without bindings, I don't think I'll be skiing the Prophets right off the bat.  I'm going to try and resist skiing them until there is enough coverage to protect them from vegetable and mineral.  In the mean time, I'll wait for the snow, ski my K2s, read books about skiing, watch old Warren Miller films and convince myself these are the best skis ever.
Labels: park city skis