My choice of framework for a celestial explanation of this world is Buddhism.  Within it, I find a faith that relies on self-awareness and compassion as a gateway to enlightenment as opposed to strict doctrine, ritualism and deism as a gateway to some place in the sky where we all get cake. [Warning: I don't expect kids to read this blog, but the a fore mentioned link does contain grownup words.]  However, if there is one area where my chosen dharma falls short of addressing a major aspect of my life, it is skiing.  Call it superstition, call it getting in touch with my Scandinavian roots, or call it animism, but earlier this month, I partook in an annual, animist ritual by making my ceremonial offering to Ullr, the Norse god of snow. [Or so we assume, in the interest in accuracy I stumbled across this blog which questions Ullr's relevance to skiing.  I guess this kind of disqualification of my beliefs could be heresy, but I thought it best not to be too sanctimonious.]

My fourth annual plea for a bountiful winter in the Wasatch began from relatively foreign territory for me, American Fork Canyon, which provides access to Little Cottonwood's southern ridge.  The goal was to reach a summit, probably White Baldy, via a trail on a southern exposure since Ullr had already started his work a week prior and I hoped to avoid any remaining snow in the northern facing nooks and crannies.  Temperatures were expected to be close to freezing, so I also wanted to have as much sun as possible.  Once I reached the top, I would ask for Ullr's generosity and offer him beer and scotch in return for a snowfall like the much appreciated 2010-2011 season.

As expected on a fall weekday, there was little activity at Silver Lake Flat Reservoir, the location of the trailhead.  There were other vehicles present, mostly fishermen and hunters, but I had the trail into the Lone Peak Wilderness all to myself.  Still, after watching a hunter pull out of the parking area on his ATV wearing a fluorescent vest, I decided wearing my bright yellow jacket might be a better choice than earth-tones.

The weather immediately put me in a good mood and the solitude improved my disposition immensely.  24 hours earlier the mountains were shrouded in dark clouds and the valley was cold and damp.  Now, on one of the few days off where I could get out for a full day of hiking, I walked squarely through the middle of a diamond of a day: cloudless skies, crisp calm air and still some dried, golden aspen leave clinging to their branches.  The good mood helped alleviate any anxiety I had.  The approach was new, the peak had only been glimpsed from a distance and my route to the summit would require a great deal of on-the-fly navigation, but a sliver of challenge seems critical to these ritualistic hikes; it adds drama.  Native Americans didn't go on spirit quests from the Bonneville Shoreline Trail.  As I startled a few elk early on in the hike and looked up at the dramatic grey walls that crumbled down steeply from the high ridgeline, I decided that even if I didn't reach the top of White Baldy, this would be a day well spent.  About 30 minutes after departing, the trail began to switchback up towards Silver Lake and I could look back southwest where the low circling sun illuminated the very tops of Mt. Timpanogos' summits and the sheltered snow lying just below the south summit. 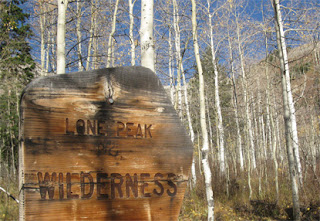 Hiking in a designated wilderness always makes a hike more enjoyable for me;  not just for the lack of motorized vehicles and development, but also for the self-reward of being in a "wilderness".  Being in a wilderness fits well with the Ullr-hike because I feel like wilderness areas force us into a state of surrender.  Without the comforts of our society [well, admittedly the pack on my back filled with GPS, food, clothing, etc. did carry some "comfort" in it] we tend to get a better idea of our true place in the world.  These wilderness sanctuaries are temples for me, and unfortunately, my temples tend to be under attack.  I won't go so far as to say my faith is being persecuted, but when Fox Newschannel starts bemoaning the "attack on Christianity" I should join in and say short sighted environmental policy like that of my governor is an attack on my religion.  But that is a topic for another blog.  What is really at the core here is the idea of "wild", which the poet Gary Snyder defined as a "process when human agency is not involved".  He continues to describe a territory that "requires different skills, is less visited, less obvious, challenges us and reminds us that we don't know what will happen."  For someone like myself who has an obsessive compulsive personality, visiting a place of surrender like the wild areas of the Wasatch is pretty essential.

Upon reaching Silver Lake at 8,940', I still basked in the autumn sun, but now I was climbing out of the protection of the canyon and started to feel the brisk winds that I worried about in the forecast.  Sitting down down for a moment to check my map and rest before beginning the more rugged part of the journey, I looked up at the chaotic heights above me.  Very little in the way of a passage to the top could be seen.  I was pretty certain White Baldy lie beyond my view even though I was more of less right under it, but geography dictated circling around it and approaching it from the east on the ridgeline.  The trail more or less ended at the lake and beyond this point I would be following faint trails or scrambling.

My brief rest over, I began the arduous climb through brush and boulders towards the next basin.  Had I gone a few feet to my right, I may have found the faint game trail that led to the even more picturesque Silver Glance Lake, but instead I struggled until the gradient eased.  It may have been somewhere in this area where I missed a more direct route to White Baldy.  Trail reports I read described finding a narrow passage while traversing west of White Baldy's south ridge.  I never really saw that and once I got to Silver Glance Lake at nearly 10,000', I figured the best route was an obvious scramble to a saddle between White and Red Baldy, then follow the ridgeline to the peak.

By now I could see my breath and was getting pretty hungry so I stopped for lunch and was tempted to call it a day considering the incredible view I had of the southern Wasatch and the nasty winds I expected higher up.  However, I put on a warm cap and gloves, slapped some moleskin on a hotspot on my heel and headed for a wide passageway between two giant granite outcrops on the north side of the lake.  Once there, I began to see a long, broad and steep path of grass and rock that led to a saddle on the main ridge dividing Little Cottonwood and American Fork Canyons.  It was an aerobically exhausting climb, but a little over an hour after leaving Silver Glance Lake, I stood on the divide and looked down into White Pine Canyon and it's high basin that snaked down into the familiar Little Cottonwood.  Unfortunately, once at this point, I could see that White Baldy still required at least an hour, if not more of pretty technical scrambling to reach its 11,321' summit.  At 1:30 pm and on my own, I didn't think it was wise to attempt the summit, but to my right was the much more attainable Red Baldy at a still worthy 11,171'.

I started east on the relatively easy route along the ridge.  Soon the white and grey granite abruptly changed to a dark iron oxide red and I was planting my feet strategically amongst the sharp, sometimes perfectly smooth rocks strewn about on the route.  A somewhat precarious climb around a small gendarme of sheer rock topped with angular spikes made for a few cautious moments, but soon I reached Red Baldy... or so I thought.  As I feared, the peak I saw when I first reached the ridge was really a slightly lower summit.  The true Red Baldy was still 200 yards across a tricky downclimb and over a razor-like ridge.  Worried about disappointing Ullr, I spent a few moments weighing my options before attempting to reach the true "named" summit.  Then, only a few feet down I decided that traversing the ridge wouldn't be wise unless I ditched the pack, and ditching the pack meant ditching the beer and scotch... decision made.  Around 2pm, I climbed back up to Point 11,158' (which was only 14' lower than the true Red Baldy), put on my down jacket, drank some hot tea and prepared to implore Ullr for a great ski season.

The first elixir for my patron of the mountains was a bottle of Zion Canyon's Springdale Amber Ale.  This has quickly become one of my favorite Utah beers and it's becoming more available up here in Salt Lake City.  I drank half and let the other half blow south in the swirling winds that were chilling the already below freezing air. Looking around with an almost uninterrupted 360 degree view, I saw yet another view of the mountains I've come to love.  There was one barrier from having a clear view east to the Uintas, but it was actually a fortunate piece of horizon obstruction.  The American Fork Twin Peaks blocked the ugly monstrosity of Snowbird ski resort's tram.  Most views  in both Big and Little Cottonwood usually include the erector set "T" that juts out of Hidden Peak, but from here, there wasn't any evidence of a ski resort for 360 degrees.  As my love of the Wasatch has grown, so too has my passion for backcountry skiing, and I could see the range as a wilderness to be explored instead of a destination for resort skiers trying to elbowing past each other for turns down Mineral Basin.  The sad prospect of yet another tram ascending to Twin Peaks reminded me how precious this view at this time was.

After a few moments of reflection, I got out the hard stuff.  6 ounces of Macallan Highland Scotch.  Half for him poured into a tiny patch of snow and half to warm my belly while admiring the work Ullr had already done. The Uinta mountains to the east were already dusted quite nicely and while I looked down at Pink Pine ridge where I could be skiing in a few months if the snow falls hard enough.  Each time I make one of these hikes, the Wasatch tends to seem a little smaller.  From where I was sitting, I could feel another "wilderness" disappear from the map of my mind.  This ground no longer seemed unfamiliar; it became part of the Wasatch that I held within me.  While I walked down from the peak shortly after, I didn't feel the summit fading into the distance, instead I felt the entire range finishing an orbit, temporarily leaving my view for a while only to rise again the next time I venture out, hopefully with skis on my feet and a few meters of powder below.

For more photos from this hike, visit my flickr set.