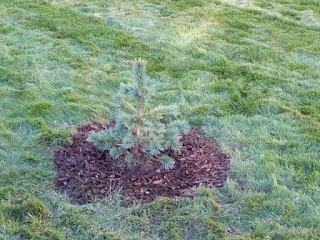 One Christmas, I think when I was 3, my parents somehow managed to get a Blue Spruce, root ball and all, to survive the holidays to be transplanted in our front yard. Because it was my little brother’s first Christmas, it was dubbed “Kasey’s tree” and through the years, we watched it grow along with him. For a while my parents were concerned about an asymmetry in the branches, perhaps a sign that it had some sort of coniferous blight that was affecting its shape, but it turns out that blight was just the 4 year old version of my brother discovering how much fun it was to whack his tree with a stick. Despite being treated like like a pinata, that tree became a landmark of my boyhood front yard. One of the great things about my yard was how many trees we had, especially in the back where two big birches stood as sentinels into my own mini-forest. Funny how rose colored the memory is of all my, primarily broadleaf, trees when raking is not stored next to it in the grey matter RAM. So before this devolves into a Robert Frost poem, what I’m trying to say is that in my first year at our own house, I really wanted to plant a tree in our rather sparse frontyard.

We moved in in May, but the planting didn’t happen until a few weeks ago. Adjusting to a lawn maintenance routine contributed to the delay, but I also realized picking a tree requires more forethought than I originally thought. I assumed the process started with getting the tree in the ground and taking care of it, but instead, deciding what to get and where to put it seemed to be the painstaking part. Lexi and I were at the local nursery looking for more stuff for our flower bed. Being the end of the season, much of their inventory was marked down and we were looking at a healthier plant to lift the spirits of our dogged looking yucca’s. We picked out a plucky looking specimen as well as a cactus, because if you are going to garden in the desert, you might as well have the rewards of making your front yard look like a Roadrunner cartoon.

While browsing the cacti in the back of the nursery, we were eventually drawn to the trees and I asked Lexi, “Do you think we’re ready for a tree?” as if we had just kept a goldfish alive for 6 weeks and we felt ready to have a child. Once we agreed that it was time for the stork to make an arbor related delivery, we had to pick a tree. There were some logistical limitations to consider , such as the fact that Oskar, my Subaru Outback, is not really designed to carry tall trees, so small was key. After I saw the price of more mature pines, small was even more OK with me. Who knew a 4 foot tree could cost over $200? I guess, like wine, in the tree business your price tag goes up as your inventory ages. A small pine (less raking and  emblematic of the west) was what we sought and we just sort came upon the Bristlecones. At first, I didn’t connect the name on the tag to the 4000 year old stalwarts that are often the main reason people visit Great Basin National Park. Because of their extreme longevity and rugged setting, you just don’t think of them when you are walking along trees lined up in little black pots like cans of creamed corn in the supermarket. Once I connected the little green sapling in front of me with the crotchety old man of the western botanical world, my mind was pretty made up. Lexi liked the choice as well, so we walked out with our new bundles of joy, a yucca, a cactus and a little pine. [I’m already planning a lame rear window sticker set in the same vein as the vomit inducing stick figure family.]

Figuring where to put it became the dilemma of the afternoon. After we got the yucca and cactus in the ground and did a little upkeep on our existing yuccas, we realized two things, 1) our newly found pine was VERY small and was going to look weird in the middle of our yard and 2) according to the tag, we could expect the pine to grow 15 feet and require 20’ in width! That surprised me, this wasn’t a Ponderosa after all. So here was this dwarf in front of me, and I had to pick a spot where it will have room and look good! We had to worry about how it would look, fully grown, at the front of our house? Is it eventually going to block the view of our flowerbed? Will it give us any shade into our house? In 10 years, what will this tree look like? The irony of worrying about how one of the oldest living organisms on the planet will affect me soon caught up to me however. Here is this tree, which could live long enough to see humanity crash and burn twice in the common era, and it’s probably wondering, “Man, how long do I have to look at this house? Hopefully that spray tan guy in the “Make America Great Again” hat wins the election so these idiots burn themselves up and we get the planet back.” [OK, I suppose pines don’t get political. And since they are trees, they have no place in conversations about scientific matters.]

Just thinking about the possible lifespan of my tree got me thinking about how inconsequential the placement of said tree really was. Who’s really in the driver’s seat here, the long living entity that could still be standing well after I’m gone, or the moron in Sandy trying to keep 3 yucca’s alive? What does it matter where I put him?... or her. Once he/her gets the roots in the soil and I get it through the transition phase, “Bristlecone gonna do its thing.” Until Kasey’s 4 year old son comes to visit.
Labels: bristlecone pine gardening trees