Finally, the Last Holiday of Winter

The rain/snow line seemed low on Sunday morning. As the UTA passed the soggy dark embankments around Tanner's Flat, it's windshield flattening big drops of rain, I remembered how spring skiing, from a Wasatch perspective, is already here. Just above that however, the precip began flecking the windshield. That dendrit-ic transformation is what I wanted to seed. Once the Birds were dropped off at the compound, the bus emptied out and its temperature dropped considerably. I was back in winter.

Riding the bus to Alta changes something in me. Driving my car up the canyon has become like spending the night with a beautiful woman that happens to have hairy armpits. Regardless of how great she is, there is no way possible I am looking forward to that part of her. So even though riding UTA burns an extra 30 minutes in stops and the ski rack seemed to be designed by someone under the impression that Little Cottonwood is straight-- with zero incline-- and that skis possess a physics-defying quality of inertia, I love it. I realized it adds a little bit of anticipatory euphoria. If you've ever been to Disney World as a child, you have likely ridden the monorail from the parking lot or your lodging, into the park. Is there any greater build up in a young mind? Knowing at the end of that monorail will be a life-size Goofy, idiot proof cars you can kind-of drive and the philosophical realization that it is a small world after all.


Somehow, the Wildcat gods smiled on me this past Sunday morning. Because about 5 minutes after I got into line, the rubes began to figure out the line at Collins was exponentially longer than what as building up at Alta's quaint little fixed double. And in fact, a rather saintly local identified a single near the top of the cue for me and I jumped all the way up to 3rd position, easily the highest I have ever been at a lift at Alta. The snow was falling, everything looked pretty well covered in cream and after the two chairs in front of me unloaded and took the path of least resistance down the runs directly under the top of the chair, I had the rare pleasure of being the first one down Punch Bowl and into the western perimeters of Wildcat. The initial turns were a little rough; the heavily trafficked areas had some lumps, but as I cut my route into Wildcat Bowl I realized that more snow fell overnight than I expected. I was worried I was going to regret not skiing Saturday, and since I can only tolerate so much of a holiday crowd, I chose to ski Sunday, and that choice seemed just fine.

I began to feel the effects of Saturday's bike ride, my first of 2017, in my legs after I incredibly had to be the first one to put in a high traverse across Punch Bowl to get to the ridge that follows the resort boundary. There were some covered tracks that looked like they were set down by patrol in the AM, but they must have come down from the ammo shack on the knob above. So I trudged through, raised my heart rate and was rewarded with the pleasure of swooping in like a hawk on the skiers taking the low route.

After two laps like that where I felt like I was in my own little tree house, I took a break and then took a lap up Collins. Gunsight sounded good, and since the diminishing visibility and new snow might make it hard for me to approach the notch from the High T, I decided I would take the Backside traverse which instead requires an immediate side-step right from the lift ramp, but the ability to ski down to the Gunsight climb instead of trying to step up to the climb. I've been doing this more lately, even though it requires using a rope to circumnavigate a small cliff band that has a two ski width passage along the rock. Once again, no one seemed interested in doing this, so I was shocked by two things. One, that in the section on the cliff band where I had to hold on to the rope for balance, I could actually ski instead of gently tiptoe along with my skis-- there was enough snow. And the second surprise is that no one had been up Gunsight in a while. There were some tracks on the uptrack, but they looked like they had been covered for most of the day. Once again, I was sitting on top of the world while rats raced below me. Once I got the top of Gunsight, the winds kicked up. Alone. 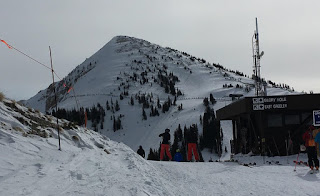 The day before, my father-in-law was skiing at Alta and sent me this picture of the rubes lined up for Devil's Castle. Glad that I can still find my way to a few spots that need to be earned.