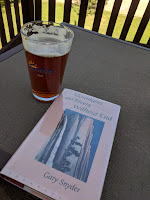 In Sunday's post, I tried to reset my goals for writing-- refocus my intentions for this blog. Part of the strategy is to use a framework to write around when I have trouble feeling positive about what I'm writing. Recently, when sitting down to write, I felt like passion was getting lost between "ideas" and "output" -- probably because I could never quite decide what I wanted to write about. Inspiration never seemed to be my problem... commitment to a firm topic was. I thought it might help if my writing and a thematic and consistent germ I could lean on for those days when my creativity was nebulous. So the framework I chose was to use the words of Gary Snyder and other writers I admire as the germ for my content.

With yesterday being Snyder's 88th birthday, it felt especially poignant to start this project using his work. So I'm starting with the first poem in Mountains and Rivers Without End titled "Endless Streams and Mountains." This may seem a bit academic at first, like some sort of "poetry appreciation" assignment, but think of it as my way of keeping the literary tradition alive in a world of emoji's and hacked tweets.

A major chunk of "Endless Streams and Mountains" is a scenic description. A footpath along the water, mountains and fauna described in detail, it's all rolled out in a linear treatment as the narrators eye's scan the horizon. These flat pieces of nature are where the life is... in fact, the few humans in the scene are the ones that seem flat, as in this excerpt:


a trail of climbing stairsteps forks upstream.
Big ranges lurk behind these rugged little outcrops--
these spits of low ground rocky uplifts
layered pinnacle aslant,
flurries of brushy cliffs receding,
far back and high above, vague peaks.
A man hunched over, sitting on a log
another stands above him, lifts a staff,
a third, with a roll of mats or a lute, looks on;
a bit offshore two people in a boat.

At first reading, without any context, it could be a description of so many places that contain mountains and rivers: the Pacific Northwest, the Sierras, the Sawtooth. I assumed that it was probably some locale Snyder himself experienced, but as I near the end of the poem, the narrative changes. And now, the first line, "Clearing the mind and sliding in / to that created space." seems to stand out more. 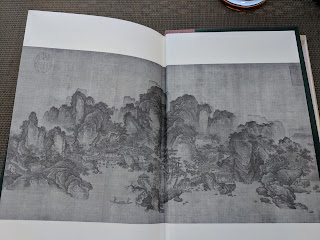 The landscape is artwork, "created space", a 13th century (or 12th, it's kind of unknown) scroll which also contains comments, made through the years, by various owners. That's explained in the second half of the poem.

"Endless Streams and Mountains" isn't about experiencing a place, it's about viewing someone else's illustration of a place. In fact, the poem ends with the narrator walking out of a museum in Cleveland, looking at Lake Erie and saying, "Streams and mountains never stay the same."

We all see streams and mountains differently, through filters created by our own experiences. Lately, at times of anxiety, I've been using some images inspired by the Mountains and Rivers Sutra by Zen Master Dogen to help calm me. One of those images is imagining a large rock in a river. I think particularly of a spot on the Big Wood River north of Sun Valley where I've camped numerous times and just stared at the running water. There are some rocks all across the river, and they are not moving, even in the high flows of the spring. The upstream and downstream, the past and future, are of no concern to the rock-- yet as the rock is in the middle of constant change, it itself is constantly changing.

Poems, blogs, words, art, even photos are our opportunity to share our experiences with others. Just like Snyder says at the start of the poem, "slipping into that created space". At the end, he punctuates it with:


The Fashioner of Things
has no original intentions
Mountains and Rivers
are spirit, condensed.

We choose to make our impressions in all sorts of ways, usually based on something we experience. I'm not writing this blog because I wanted to write a blog, but because something made me want to write a blog. There are no original intentions, for us or in nature... that's probably what makes nature so amazing; everything in it is the result of something else.