So Here is My Awesome Labor Day Weekend

Sometime last week, while distracting myself from productivity with Facebook and the over-consumption of whiskey, I posted to my timeline some rant about doing something crazy for Labor Day weekend. I actually got a lot of reaction, which made me question my cynical view of what people pay attention to on social media. I mean, I didn't even have a picture with the post. And it was more than five sentences. It almost tipped me over the edge to do what was in the back of my mind... almost.

You see, after seeing Dave Matthews Band at USANA Tuesday night, Lexi and I were lamenting that we didn't make plans to see him at the Gorge again this year. Knowing that Gov't Mule would be opening for Saturday and Sunday nights' shows only got me more jazzed. So the "crazy" idea was for us to drive 13 hours for a concert. Something I probably wouldn't have blinked at in my 20s. However, when considering the cost and inevitable exhaustion that would dog me at work all this week, we opted to stay home. So I missed out on seeing Warren Haynes play on both "Cortez the Killer" and "#41", but here's what I did instead:

Normally I like my road rides out of the way early, before traffic and heat are a problem, but I think I was still catching up on missing sleep from Tuesday's concert (yes, I'm old). I didn't get on the road until 10ish. But I wasn't going to let heat and traffic be an excuse because I haven't been out for a true road ride in a while. After a July where I rode more miles in a month than I've ridden in years, I wanted to get back into a groove. Should have been a 40 miler, but cut it at 34 when the heat started getting to me (I think 100 was the high on Saturday). Probably would have been more eager to round out the loop had I not blown 25 minutes on a flat. You'd think that after 20+ years of seriously riding bikes, I could change a flat in less than 25 minutes, but I have this sinister combination of stubbornly tight Continental tires and deep rims on my road bike. I'm convinced every time I have to swap out a tube, the tire thinks, "How far can we push him this time?" Right as my thumbs are worn raw and I'm about to break, somehow the bead wraps over the remaining few inches of rim-- as if it could have done it at ANY DAMN TIME! Like, after I pinched the second thumb between rubber and steel and got a nice blister, the sadistic German fucker of a tire got it's reward and thought, "All right, I guess we can let him get back to riding now."

"Chore I Didn't Have to Do, but Did Anyway"

It started when I moved my office downstairs with my desk near the window. We live in a split-entry so the basement windows are kind of at eye level. Last year we got some nice landscaping done in the front yard so it's kind of nice to look out and see our cactus (one of the few plants I planted that has actually survived), the blooming flowers that attract bees and the occasional hummingbird, and a green lawn instead of the driveway view I got from the upstairs version of my office. The only problem is that the windows were so cloudy from years of sprinkler head exposure that I might as well have been looking through the grease soaked napkin they use to wrap up In-N-Out burgers. So I thought I would wash windows after my ride Saturday. Well, once I realized that the Home Depot window washing solution was no match for years of hard water stains, I turned to the only thing that has kept me sane as a homeowner: YouTube. That's where a kind Canadian named Gary showed me what I could do with lemon juice, vinegar and baking soda. Not easy, but pretty amazing as you can see in the picture below. I don't have a before and after, but trust me, the window on the right was as bad as the one on the left.

And make sure if you have water softener needs and happen to live in the Midland, Ontario area, you should stop by Gary's Water eStore. 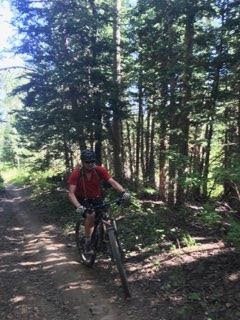 Even up in Park City, there wasn't much escape from the heat. Jared and I got a morning start, but by the time we hit the upper turns of Armstrong on Sunday, it was starting to feel like an oven. I guess the one saving grace was that the worst stretch of riding, a steep mile plus on Powerline, was mainly in the shade. Our route was dubbed "old school" by a fellow rider we met on the trail, mainly because Powerline isn't ridden much anymore, but it is one of the older trails at PCMR. In fact, I think I rode it the first time I ever rode in Park City, maybe 16 years ago, back when Spiro was the only way to get to it. And as I struggled to keep the wheels rolling up the pitch, in spite of the asshole who thought he had room to descend against me while I struggled to keep my line, I thought, "I think I can wait another 16 years to ride this again." I think it just drives home the point of how much goes into building a good mountain bike trail. And while Park City has some other great trails I love riding, I would like to send someone from their org up to Targhee to prove that ski resorts don't have to go straight up the mountain. Note in the picture how on an otherwise straight trail my front wheel is inexplicably turning. If Jared wasn't sending me photos over 56k modem on his AOL account, you might see me gritting my teeth. 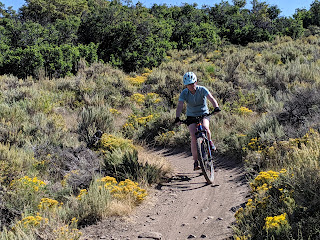 Between Saturday and Sunday's ride, I was ready for a mellow ride on the holiday, so Lexi and I went up to Round Valley. I think the testament to how much she's improving on a mountain bike is that she thought the 9 miles we did on some of the intermediate trails were easier than the short beginner trails she was riding just a month ago. Round Valley is not exactly intermediate intermediate riding, but it's all a process, even if she has to walk a few spots. And while there are all manner of riders on this system, it's very non-aggro, which is great for those like Lexi still getting used to the sport. One observation I had: are white cotton crew socks for cyclists the equivalent of skiing in jeans?

So that was basically my "final" weekend of the summer. Although with temperatures above 80 for the next week+, I'm not sure who would think summer ends after Labor Day. It's a good thing too, I still have windows to wash. Thanks for the tip Gary.
Labels: labor day park city mountain biking shadow lake loop