My ski season blog posts can be predictable. For example, the first post normally covers the topic of how overrated opening day is. An icy ribbon of man-made hardpack does not, in my opinion, warrant a drive up the canyon. However, in this, my 15th season as a Wasatch skier, a season in which I'm trying to focus on the positives of skiing, I've had an auspicious start. After withholding their aid to the point where Alta bumped its original opening day from November 23 to November 29th, the ski gods relented this week and finally delivered their winter package to the Wasatch. (We're still investigating whether snow was dependent on a quid pro quo for libations.)

This storm cycle had been hyped for almost a week, and understandably so. The "Halloween" storm snow had gone from "treat" to "trick", diminishing and faceting during nearly a month of clear skies and high temps. My cynicism about early season snowstorms seemed justified by this drought. Like Halloween candy, October snow is rarely good for you and would likely make the backcountry off limits for a while. Memo to Ullr and Skadi (Norse gods of skiing): "Don't tease me. When you're good and ready, snow. If you're not ready, just wait."

Another mild storm had come through the week of the 18th, breaking the drought with about 8" in the Cottonwoods. Not a bad start, but before that storm had moved on, I was looking at the forecast and eyeing the models for the week of Thanksgiving. Something big was shaping up. It prompted me, (and judging by the 5 hours I spent at Discount Tire last Tuesday, most of Salt Lake County), to get the snow tires on the Outback, and evaluate if this would be a season to start on opening day.

I'm struggling to remember the last time I've skied opening day--could have been almost 10 years ago--and I'm not sure I've ever skied an Alta Opening Day--but I thought if these storms turned out to be as good as predicted, it would be a shame not to ski on my Black Friday holiday.

There are other reasons I tend to avoid opening day: crowds, traffic, limited terrain, and recently, a reluctance to start to trigger my E.O.G.O.M.S. (Early Onset Grumpy Old Man Syndrome). Skiing in the Wasatch now carries a lot of baggage; and last year in particular, I was questioning whether the sport was pulling more negative than positive energy out of me. I'll get more into that in the future, but in terms of the 2019-20 season, I wanted to start with positive vibes. I chose to leverage the gifts of the gods and got up Friday morning to take the 8:40 bus to Alta.

The 994 was scheduled to arrive at Alta at 9:20 am, just 5 minutes after lifts were scheduled to open. As eager as I was to ski, I had no desire to get there any earlier. I knew there would be a line, and I expected the lifts to be delayed anyway. For the week leading up to November 29th, Alta reported over 50" of snow. That was all sitting on top of that demonic October layer and bound to cause some concern for patrol. That likely meant at least a 15 minute delay. Sure enough, the explosions of avy control were frequent while waiting. I even heard three in rapid succession, which seemed unusual and had the effect of making it sound even more like a war zone. I didn't have to look far to see signs of the sleeping dragons. There was a slide on the edges of Corkscrew, the main run leading back to the Collins lift. My 15 minute delay estimate was far off. Collins didn't start loading until around 10:30. They did get Sunnyside open sooner, causing a funny looking rush as skiers hurried to grab the rope tow up to that chair for what amounted to bunny hill runs. Anyone who pulled that move was in better position to get on the Sugarloaf lift, which opened sooner than Collins, so I guess the joke was on me.


My first run started just after 11. Patrol had roped off everything leading back to Collins. They were still concerned about the snowpack, and it made sense. Not only were they worried about the usual suspects like Ballroom and Rustler, but a massive slab had broken to the ground in the trees near Fred's. It was right below the lift and pretty impressive. My surprise was validated later when a ski instructor told me a 40 year veteran of the patrol had never seen a slide like that in there.


With the runs into Collins Gulch closed, my decision was made for me; my first run of the season would be down Devil's Way over to Sugarloaf. The opening pitch, which on a normal opening day would be icy and test your edges, had not been groomed and was instead chopped powder. I think a lot of skiers, myself included, weren't quite ready for "powder" on opening day--seems ironic for Alta skiers. I veered skier's right into the fringes along the trees, getting "fresh" with the mountain while also avoiding some of the carnage on the main run. I honestly don't think these people were beginners; I think they were just caught off guard. We all expect to ease into the season with a few groomer laps, not demand our knees absorb lumpy gravy in poor vis on our very first turns of the year. The flat leading towards Devil's Elbow wasn't quite groomed either, so I really had to tuck it and stay in tracks to get across. Elbow would be the only open run off of Sugarloaf, and until they opened up Collins to skiing, the lift line was big, but not really that far out of the ropes.

Skiing laps on Elbow is often an exercise in maneuverability. It's narrow, twisting, and usually crowded, even on a day when the rest of the mountain is open. Trying to run the gauntlet while my quads awoke from their 5 month hiatus was strenuous. I've done some pre-season conditioning, but I'm convinced that no matter how many wall sits you do, nothing truly prepares your legs for the mechanics of skiing. They usually bark at me on that first run while I try to get my muscle memory back, then settle down once the adrenaline of the first run wears out and I ski less like a downhill racer.

Eventually Collins did open, and after taking advantage of the short Sugarloaf lines caused by the exodus, I also took the rope tow back over there to get in some top-to-bottom runs. The East Baldy Traverse was not open, so that was my only way back. Visibility continued to fade in and out and while there were a few more route variations descending from Collins as opposed to Sugarloaf, skiers were still essentially restricted to Mambo; everything east of Mambo was shut down and Main Street under the apron of Baldy's chutes was definitely off limits. 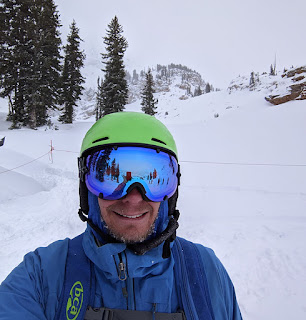 Around 12:30, the next phase of the storm was starting to kick into gear. Soft turns with little risk of ski damage could be found all over and I asked myself, "Does this count as a powder day?" It didn't seem like it should, mainly because I rarely spend powder days lapping the main drags, but really, for all intents and purposes, it was a powder day. I was happy. It was a good day skiing, but my legs were starting to fatigue and my right ankle, the one I sprained two summers ago, was yelling that it wanted out of the boot. I checked the bus schedule as I loaded Collins around 1:30. UTA was on a limited schedule and my choice was to make one last run and catch a 2:04 bus, or wait another hour. I doubted my legs had another hour in them, and one more run would still put me at 15k, a decent start for the season. I also figured I'd be back up again over the weekend, so I called it a day after one last trip down Mambo and boarded a much more crowded bus for the down-canyon trip.

As someone who complains about the traffic in the canyon, I feel a responsibility to ride the bus whenever I can, but I get the argument people make that nothing is worse than being stuck on a bus for nearly three hours like I was that Friday afternoon. A Sysco food truck and an up-canyon bus were struggling in the snow and causing delays. I'm not sure where the UDOT plows were, but in my opinion, they were desperately needed to make a pass on 210 about an hour prior to my departure. But you make the best of it; talk to fellow skiers and marvel at the ridiculousness of 14 year old boys who find it entertaining to see who can yell "PENIS" the loudest. Plus, my delays were minor compared to anyone who left after me. My niece, who was skiing up at Snowbird didn't get down until 9:00 pm.

Given all the snow that fell on Friday, and the vast acreage that wasn't skied, I chose to get right back out there and grab day 2 of the season before November ended. Riding UTA had burned too much of my weekend already, so I cashed in one of my selfish cards and drove up early. I drank coffee and journaled in my car before getting in line around 9:15. In reality, Saturday was just a remix of Friday. Collins didn't open until 10:40, but while waiting in line, I got to see a few impressive slides on High Boy. And once again, the only skiing for the first hour was on the Sugarloaf side. This time, I stuck it out on Sugarloaf a little longer and racked up the runs while there was no lift line--even rode single on one. This paid off when patrol moved the EBT rope back a little further west so that you could now access the top of Devil's Elbow, the short bowl just as the traverse bends around the gate to Snowbird. I just happened to be unloading Sugarloaf not long after they did this and since it was untouched for two days, it turned out to be my deepest turns of the season to date. Ironically, it was also where I hit my first rock of the season. No worries on that, vindication for bringing up the rock skis. Did two more laps starting from the same place until it started getting tracked up, then headed back over to Collins, once again reliving my childhood on the ropetow. I did a few more top-to-bottom Mambos and ended my last run with a detour on Lower Rustler, which also must have just opened that day.

Overall, day 2 was colder, but better. Visibility was better and the overnight snow refreshed everything. If you weren't looking for the Fred's Slot fracture under the chair, you might not have noticed it. Seeing the peaks of Devil's Castle and Baldy was nice too, but a reminder of how little snow we had. Probably need a few more storms before Castle is skiable. Yet, considering I often compare opening day runs to a white thong on the bare ass of the Wasatch, this was a extremely better experience than any other opening day I can recall.