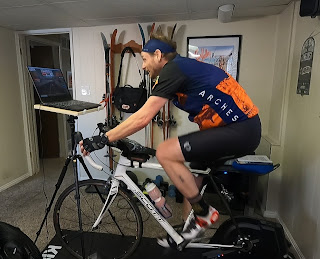 Saturday was my FTP Test for BaseCamp. (FTP stands for Functional Threshold Power. If you're curious about what it means, I described its purpose, and the mental struggle I have with it, in my last post.) While I'm not thrilled that my resulting "number" dropped from previous tests, the overall experience was good—exhausting, but good. Now that I have this numerical snapshot of my current fitness, the next 15 weeks are all about raising it back up to where it was this summer. Actually, the result was pretty close to what I got when I started "training with power" in the summer of 2020, so there is some security knowing that where I am now is not that much different from where I was once before.

For reference, my last FTP test was on July 8th as part of my training for Rebecca's Private Idaho (RPI), a 100-mile gravel race in central Idaho. As part of that training, I was also supposed to do a second FTP test in early August, but I skipped it due to vacation. In the time that has elapsed since RPI, I have taken some longer spells off the bike than I've had in a while. That doesn't mean I stopped riding entirely, but I did have a few stretches of 7 to 10 days without riding. Not much of my riding during that period was very "serious" and limiting my caloric intake during that period was also not much of a priority.

Zwift comes with a ready-to-load FTP test as part of its training options, and this is the first time I've used it. In the past, I've loaded a workout provided by BaseCamp, the training program I've been using since 2020, but one nice thing with the Zwift test is that it shows you your average wattage for the test as you go; so you know exactly as you crank where you stand. However, sometimes I like to be "blind" while riding, and I was worried having the number constantly staring at me might demoralize me.

The 20-minute test is part of a full ride that I did was an hour and 37 minutes; I didn't just get on the bike and go. I was supposed to do 2 hours actually, but as I'm still adjusting to the mental prison that is pedaling in place, I cut it a little short.

My ride roughly consisted of:

The 5-minute at or above threshold seems kind of cruel. The first time I did one of these, I thought, "Why would you push yourself before seeing how far you can push yourself? If I'm going to Golden Corral, I don't stop at Chuck-o-Rama for appetizers." But in this situation, it is meant to burn off my stored, anaerobic energy. That way, the FTP test is strictly a judgment of the power I can output at aerobic capacity. The 5-minute effort did have a specified wattage, which I did exceed, and that may have been a mistake based on my results, but after the ride I compared that 5-minute result with my past 5-minute bests, and it wasn't even close to being my hardest 5-minute output, so I'm not going to spend to much time worrying that I ruined my FTP test by going too hard in that segment.

The thing I love about training is the analysis. Looking at the different numbers and metrics afterwards is always kind of intriguing. I'm not sure if I need to go into too much of that analysis here, this is, after all, meant to be a recreational and entertainment blog, not a fitness or training blog.

The night before the test, I built a playlist to help get me through the pain. Cranking tunes is one of the best side-benefits of riding indoors (the other is reading). The downside to building an epic playlist however, as I found out when logging my video from my ride, is that pedaling a bike at max effort and jamming out to music make me look about as ridiculous as Elaine on Seinfeld dancing.

I actually spent a lot of time scrutinizing the songs from my personal library and where they would occur in my ride. Proud to say, the synchronization was pretty close.

Like most people who grew up compiling mix tapes, I do not use Spotify typicall. Instead, I normally build playlists mostly out of music owned and stored on my own computer. In case you're interested in any of the music thought, I made a Spotify playlist, but one tune couldn't be found in their database, so it's not entirely accurate.

A quick note about "ERG mode". This get a bit "wonkish", so feel free to skip this paragraph if you want, but it's a term I use a few times in the following video and I thought it might need some context. ERG is a setting in Zwift that is pretty critical when training with power. When ERG is enabled, and I ride one of my structured workouts, the trainer controls my effort by adjusting the resistance according to the workout. So if the workout wants me to pedal at 170 watts for 5 minutes, the trainer makes sure I pedal at 170 watts for 5 minutes, regardless of how fast I'm pedaling or what kind of virtual terrain I'm riding on*.* With ERG mode disabled, as it needs to be for the test, the trainer adjusts my resistance according to the course. So with ERG mode off (referred to as SIM mode), hills feel like hills, flats feel like flats, and descents feel like descents. With the exception of turning and stopping, SIM mode is more like riding in the real world because you ride the terrain and shift accordingly. And because the FTP test is not about parking me at a specified wattage and instead seeing how far I can push my wattage, ERG mode should be turned off. So that's what I'm talking about when I mention ERG.

And in case you want to see my vlog commentary on the ride, I edited this video here. Some of my narration may be a little difficult to pick up